When helping teach a child a speech sound (e.g., the "s" sound), there is a specific order, or "hierarchy," of difficulty that most speech-language pathologists (SLPs) follow.  It is a general pattern that I follow most of the time for children who have a couple sound errors, or an articulation disorder. I like to refer to it as the Speech Sound Ladder. Before I get into the Speech Ladder, I'd like to quickly note that certain factors (like the other sounds produced around the "target" sound) can influence how difficult it is to say correctly. ALSO, sounds can be found in the beginning of words (e.g. the "k" sound in "cat"), the middle of words (e.g., the "k" sound in "locket"), or at the end of words (e.g., the "k" sound in "bake"), and sometimes your child may be able to produce the sound in one word position, but not another. I will let you know what word position and what "step" on the speech ladder we are working on during your child's therapy for the week.

Without further ado, the speech ladder... 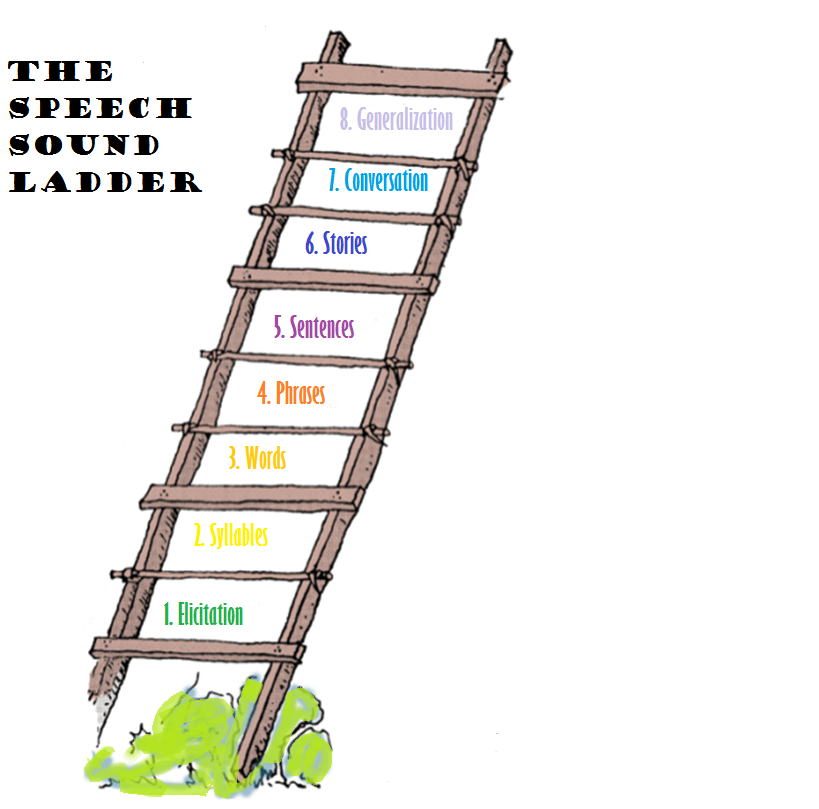 
The first step on the ladder is "elicitation," and your child will start here if he or she is not "stimulable" for a sound. If your child is stimulable for a sound, it means that he or she can correctly repeat back the sound after it has been said or "modelled" for them. For example, if your child is having trouble with the "k" sound in a word, and you told him, "say 'k'" and your child responds with "k," he is stimulable for the sound. If your child is stimulable for a sound, we will most likely skip ahead to the next "step" on the ladder. If not, we will work on elicitation or producing the correct sound.
For sound elicitation, the SLP breaks down the process of producing the sound for the child in order to teach them how to say the sound correctly. For example, if your child is replacing the "th" sound with the "f" sound - the therapist may take out a mirror, and say, "watch how my tongue comes out when I say 'th'....'ttthhh'... I put my tongue between my teeth and blow, 'ttthhhh'.... Now you try it. Remember to stick out your tongue" (then repeats the sound with the child). As I continue to work on this blog, I will link up the common "tricks" I use to teach a sound to the letters below since I will often reference different tricks I found more successful for your child. Once your child can say the sound in imitation (repeating it after you), then you can have them say it repetitively on their own.  Once you're satisfied he can do it most of the time (around 85%), then he's ready to move onto practicing the sound in syllables.
Tips and Tricks for Eliciting:
The "K" Sound
The "G" Sound
The "S" Sound
The "Z" Sound
The "Sh" Sound
The "Ch" Sound
The "L" Sound
The "R" Sound
The "F" Sound
The "V" Sound

Typically, I try to find which place (i.e., before or after the vowel) your child is most successful, and I start there. As he begins to experience success, I move to the more difficult position. With certain sounds, you may notice your child has an easier time with certain vowels than with other vowels. For example, if we are working on the "r" sound, and your child typically replaces the "r" sound with a "w" sound. He may have an easier time producing the "r" sound with the "ee" sound than the "o" sound because for both the "o" and the "w" sound you need to round your lips and with the "r" and the "ee" sound you smile. Again, we'll start with the easier vowels and work our way to the more difficult contexts.  I will probably note these difficulties on the speech homework card I send home to you. I also probably included some information in the "tips and tricks" section for your child's target sound that will help you know which sounds may make it easier for your child to produce the correct sound and which ones may make it more difficult for the common error patterns.

We've already talked a bit about this, but with words, we will target the sound in the beginning of words, the middle of words, and the end of words.  I will send a list of words home after each therapy session for you to practice with your child. The speech binder or folder I sent home should also include several words to practice. If you are more of an iTunes app person and are willing to spend between $5-7.00, you could check out the Articulation Station app. I've linked it up under the "sentence" level step. Once your child has reached 85% accuracy in therapy, we will move onto the next step in the ladder.. I may reference cues I am using that help your child remember to say her sound correctly. These will be under the Tips and Tricks link in the "Elicitation" section of this article.

Depending how your child is doing at the word level, I may proceed to the "phrase" level or jump straight to sentences. Generally, if I jump to sentences and the child is struggling, I will drop back to the phrase level. For the phrase level, I just use common "carrier" phrases with only a couple words to help practice the sound in a slightly longer context than words, but simpler than sentences. Some common carrier phrases I use are: "I see a ___[target word]____," "I found a ________," "There's a _________," or "I spy a __________." You get the idea. Once your child has mastered phrases (around 85% accuracy), then she's ready to move onto sentences! 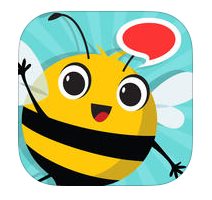 For children who can read, I often have them read sentences to me that contain their target sound. I have included a section in your child's speech "binder" or packet that has hand-outs at the sentence level. If you're an iPad/iPhone person and willing to spend around $5-7.00, I often use the iPad app "Articulation Station" to target sounds at the sentence level. I included the app icon to the left to make it a little easier to find. I think you can download the app for free, and then extra decks for specific sounds can be purchased as an "in-app" purchase. You can also check it out by clicking on this link: Articulation Station


6. Stories
I  don't often work with kids at the story level, but if I find that the sound hasn't started to generalize (or pop up without help) in conversation at this point, I will sometimes work at the story level. I have had children make stories with their target words, and I have also picked a story that has lots of a certain sound in it and had the child read or re-tell the story.  I will try to link up book lists for each speech sound as the year progresses. The text below should appear blue and underlined if I linked it correctly.

To work at conversation level, I often provide home programming to parents at this point, and I encourage them to be practicing the sound at home in conversation because of high caseload demands. When I have worked on it in therapy (usually with my private practice), I will play a "Would You Rather?" game and have the child explain "why" (e.g., "Would you rather lick a lemon or learn to line dance?") because it gets the child to say the sound ALOT in conversation. I also will play language games like "Hedbanz" or pull random conversation starters from a jar (you can make up your own or buy a deck of cards from super duper called "The Question"). I've also capitalized on interests, like Pokémon, and had the student talk about the cards they'd received... Really as long as you've got a conversation going, you can work on the sound at conversation.

Generalization is the final step on the ladder. It means that your child is now correctly producing the sound in everyday conversation without any help from you. If your child hasn't generalized, you may want to move back down the ladder to continue to work on the sound. You may also want to practice having your child "catch" you saying the sound incorrectly during a conversation, and then also during his or her own speech.

So, congratulations! You've made it to the end! I hope this gives you a bit of an idea of the process we will be moving through with speech therapy. I will let you know what level we are on in therapy and which things are helping your child the most, but remember that you practicing with your child for a couple minutes every day is going to make a much bigger difference than if I see him for longer sessions on the one day a week I am at his school. Think about if your child is learning a new skill, like playing the piano, daily practice is required to truly become skillful. If your child only attends the lessons but never practices the skills, then he or she won't progress much from week to week. :)

Thank you for all your hard work!
Posted by Unknown at 6:32 PM No comments:

Email ThisBlogThis!Share to TwitterShare to FacebookShare to Pinterest
Labels: articulation


My name is Beth Ng, and I will be the speech-language pathologist (SLP) this year at your child’s school! I’m excited to begin a new therapy block and hope that your family is excited as well. I am hoping to see your child approximately once a week for 20-minute sessions. These times are estimates as I have other responsibilities that occasionally interfere with therapy, and I am only at your child's school once a week. The current therapy block will run from December – March, and we will re-evaluate the need for therapy following this therapy block. If your child progresses quickly, he or she may graduate from speech therapy earlier!


With this blog, I am hoping to keep you updated on what activities were completed during speech therapy. You will find tips and tricks to help your child learn how to improve his/her speech and language skills.  If you could spend 5-15 minutes each day practicing these skills, it will really help with progress. Plus, home practice increases the chances that your child will correctly use these skills at home as well as school. Following every session with your child, I will be sending home a quick note letting you know what we worked on in speech and the "goal" we are practicing in therapy. I have split this blog up into the common goal areas. Each area will include information, tips, and tricks for working with your child at home.  Below I have provided links to the introductory posts for each area and the themes or activities we may be using during the week.

What's Happening This Week
Speech Sounds
Cycles
Sequencing and StoryTelling
Grammar
Fluency
Please feel free to call me or e-mail me at any time. If you have lost my contact information, the classroom and resource teachers should have access to that information. Typically, e-mail is the best way to get ahold of me. If you prefer the phone, I am more frequently in the office on Thursday and Friday afternoons; however, this time may be spent in consulting with other professionals or for meetings, so please make sure to leave a message with your name, your child's name and school, a number at which you can be reached, and your reason for calling. I will get back to you as soon as possible.
Posted by Unknown at 6:13 PM No comments: